The Cutest Little Babies in the World (of Warcraft).

Nymphy is an arcane mage from the US-server Azuremyst. She is a well liked toon by other people across other servers and time zones. She was recently felled not by an ordinary raid boss, but instead was slain by a little 5-baby instance group with the buffs of Squee and Cute on their side.

#Dwarfling, #Sproutling, #Sapling, #Knightling, and finally #Tankling. Those of you that follow us on Twitter are familiar with these hashtags denoting quite possibly the cutest babies born this year to the bloggers and players of WoW. A couple of them with their own blogs have caused us to squee and exclaim over posted pictures and new adventures. It wasn’t until recently that we all came to the conclusion that, well, they make up the perfect 5-man group. That idea took root here and I became determined that this should be blogged about. After all, it is only fitting to talk about babies born to bloggers in a blog post! So it is my very special pleasure as a fellow blogger, WoW player, and mom to introduce this special little 5-man. 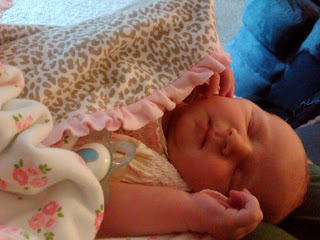 The most recent addition is little Elliana (affectionately known as Elli). Born just a few weeks ago on June 24, she joined the queue as the #Tankling. Her being the newest member of this group is fitting because anyone who has ever tried to put together a group knows that the tank is the hardest to find. Her Daddy, the first boss she downed when coming into the world, is Orvillius, our own paladin tank from Eff the Ineffable as well as the co-author of this blog. With her epic Shield of the Glow Worm and Nuk’s Little Pacci, she uses the Paladin’s power of the (glow) Light to help the rest of her group defeat the bosses they encounter. Her main threat generation spell is Teensy Red Curls. Previously mentioned in an earlier post, this spell is super effective against the Daddy boss who has a weakness for them. Tankling is a hungry little one and gets fussy when she doesn’t have any Holy Power generated. Once she has 3 stacks of HoPo she can use her finisher, Big Blue Eyes, guaranteed to down bosses in quick succession. 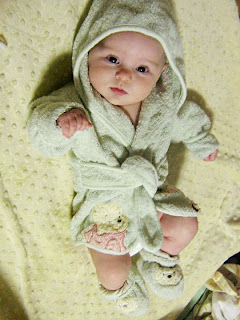 Teagan, born to Fannon, the dwarven priest healer behind Dwarven Battle Medic was dubbed #Dwarfling when she came to us this past February 15. This “Little Poet” was the genesis of the Twitter group #InternetAunties and, being half Wildhammer dwarf, has a wide adventurous streak. She brings the adorable heal Cute Strike to the group. Similar to the grown up Priest’s spell Smite, this dwarven Holy Priest has a 100% crit chance. Fannon says the spell is like getting hit in the face with a sack full of adorable kittens, it hurts but aww! With her epic Tier gear bonus set, (It has to be Tier because no set matches like hers!) the Vestments of Transcendent Cuteness, Dwarfling has a 50% chance to proc Adorable, providing +50 Cuteness, making her group even more powerful. The first boss she pwned was her Daddy, using the spell Inconsolable Cry which evoked a nightmare of her running off and marrying a biker. You can read about that and all of her solo adventures in the letters from Fannon entitled Dear Dwarfling. 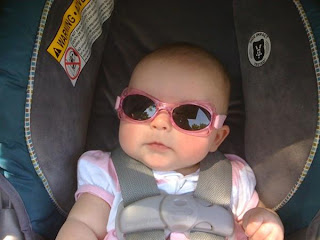 Taylor, the Unholy Cuteness specced Death #Knightling joined the queue on February 22. Born to Ceraphus of the gamer blog Variant Avatar, she is one of the higher leveled members of this 5-man, and has had time to pick up some high ilvl epics like her Smile Stealer Great Rattle and her Relic of the Diaper Genies, and to train some of the most powerful spells she will use. Her rotation includes Sleeping, akin to the grown up Reaping, this spell, activated by cooing while laying down, will automatically proc a 100% critical strike to Cuteness. This debuff is enhanced by talent Cute Epidemic which increases duration by 5 seconds per talent point. Combined with Smile Infusion, a 33% chance on smile to make parentals melt, this is a formidable DPSer indeed! Added to these are the heavy-hitting  Ebon Poopbringer, granting 100% chance to cause Death and Decay in her Elementium Diaperplate Battlearmor to Raise Parents, a spell that raises her parents out of a deep slumber to do her bidding. 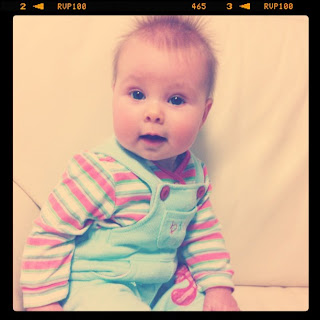 Caitlin was born to Lathere of HoTs n DoTs fame January 5th and is called #Sapling. Her solo adventures are featured in her own blog called Baby Sapling She is a gnome arcane mage (although Daddy thinks she may disguise herself as a murloc complete with the mrgllrgl) and the spec is evident by her poopsplosions. These are like the grown up spell Arcane Explosion, only far more messier. And like any mage, she can provide refreshments with her spell of Conjure Solids that provides yummy Sweet Potato and Apple Puree, not like the mere cake that the grown up Conjure Refreshment does. Her special brand of Polymorph causes humanoid females to run around stunned for up to 50 seconds unable to Wipe Faces or Wash Hands. We can only deduce this has a critical effect to mommies who have a weakness against Cute. Armed with the Epic Spoon of the Yellow Sun, her gear is especially specced to withstand the Teething Boss and includes the Necklace of Baltic Amber, Physician’s Magical Bottle of Nurofen (An offhand), and the Wand of the Sacred Bonjella Tube. 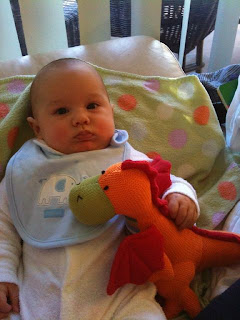 Matthew joined our queue on March 21 and is the baby resto/feral druid born to Angelya of the blog Revive and Rejuvenate. He was working on his healy set but lately, with the help of Mom and Dad, has been focusing primarily on his feral Agility gear by doing the daily quest “Dance Around the Living Room” and recently acquired the rare chest piece Bonds Wondersuit of the Monkey which boosted his overall ilvl to just under the heroic threshold. He starts every fight using his first move of Disarming Smile. This is a DoT that reduces the most terrifying boss to a pile of squeeing mush. With his sharpened fingernails, he adds an extra damage buff to his Rake and Shred. If the boss isn’t finished by the end of this, he relies on the Balance spell, Gaseous Winds, that knocks the boss over with its putrid wave.  He is serious about his future career in WoW, faithfully watching fight strats brought to the babies by Playschool (this 5-man’s equivalent to our grown up Tankspot). You can follow his leveling adventures through his blog The Sproutling.

This could be one of the most powerful 5-man groups out there considering the damage they have done already to the most powerful boss of them all, the Internet. Born of bloggers with WoW toons across several servers, these babies have wormed their way into our hearts through their parent’s blog posts. It has been a very squee inducing pleasure of mine to write this post on behalf of all of the, perhaps more talented and well known, bloggers mentioned here. A very special thanks to Fannon, Angelya, Ceraphus, Lathere, and Orvillius for letting me borrow the power of their babies’ cuteness for this blog entry. Perhaps we can all get together next time for a sample “instance run”?
Posted by Nymphy at 3:53 AM